Special series! Cute baby mickey mouse in pluto dog costume. The hoodie is able to pull down (but not removable).

If you like mickey mouse and his pluto dog, this is the perfect plushie for you! About 40cm tall.

Mickey Mouse is a cartoon character and the mascot of The Walt Disney Company. He was created by Walt Disney and Ub Iwerks at the Walt Disney Studios in 1928. An anthropomorphic mouse who typically wears red shorts, large yellow shoes, and white gloves, Mickey is one of the world’s most recognizable characters.

Mickey generally appears alongside his girlfriend Minnie Mouse, his pet dog Pluto, his friends Donald Duck and Goofy, and his nemesis Pete, among others (see Mickey Mouse universe). Though originally characterized as a cheeky lovable rogue, Mickey was rebranded over time as a nice guy, usually seen as an honest and bodacious hero. In 2009, Disney began to rebrand the character again by putting less emphasis on his friendly, well-meaning persona and reintroducing the more menacing and stubborn sides of his personality, beginning with the video game Epic Mickey.[3] 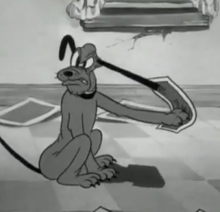 Playful Pluto (1934); Pluto struggles with a piece of flypaper

Unlike Mickey’s other animal friends, such as Goofy (who is also a dog), Pluto is a relatively normal animal, with few anthropomorphic traits apart from his facial expressions. Pluto does not speak, walk upright, or wear clothing. A significant departure from this was his speaking role in The Moose Hunt (1931), which was produced before Pluto’s characterization had been clearly defined. As Pluto made more appearances, it became common that he would not speak, but only vocalize in barks and grunts. Other ways of communicating Pluto’s thoughts occur through his facial expressions, and sometimes through the use of a shoulder angel/devil who speak directly to Pluto. (Mickey’s Elephant, Lend a Paw).

Pluto is generally a cheerful and adventurous dog, although he can be given to sheer panic when confronted with something unknown. Common themes in Pluto’s stories involve him becoming jealous of Mickey getting another pet (Mickey’s Elephant, Lend a Paw, Mickey and the Seal), Pluto accidentally and unwittingly swallowing something and panicking when he realizes it (Playful Pluto, Donald and Pluto), Pluto getting entangled with something inanimate, or Pluto being pestered by a smaller animal (Private Pluto, Squatter’s Rights). In many of his appearances with Mickey, Pluto will get himself into trouble and cause Mickey to get angry at him. Mickey, however, often cheers up quickly; often telling Pluto “I can’t be mad at ya.”

Pluto sometimes appears with other regular animal characters. His friends include Fifi the Peke, Dinah the Dachshund, and Ronnie the St. Bernard Puppy. Other animals he is less friendly with include Salty the Seal, Butch the Bulldog, Figaro the Kitten, Chip ‘n Dale, Spike the Bee, Bent-Tail the Coyote, Milton the cat and other characters. In Disney’s 1937 animated short Pluto’s Quin-Puplets, Pluto has a son who is simply referred to as “Pluto Junior.” In the 1946 animated short Pluto’s Kid Brother, Pluto has a younger brother named K.B.