We have other sizes available too, subject to availability upon request.

Kindly contact us directly (8268 2133) if you have further enquiries or special requests before ordering. 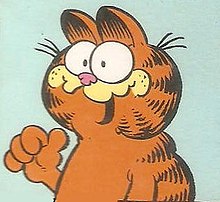 Garfield, as portrayed on the back cover of Garfield At Large.

Garfield was born on June 19, 1978, in the kitchen of Mamma Leoni’s Italian Restaurant. As a kitten, he develops a taste for lasagna, which would become his favorite food.[3] Because of his appetite, the owner of Mamma Leoni’s has to choose between keeping Garfield or closing down his restaurant; so Garfield is sold to a pet shop. Garfield is adopted from the store by Jon Arbuckle on August 19, 1978. In his cartoon appearances, Garfield usually causes mischief in every episode. In June 1983, comic strips introduced Amoeba Man, one of Garfield’s alter-egos, yet he was only shown in six strips (June 20–25). In February 2010, another alter ego was introduced called Super Garfield, and his sidekick Odieboy (Odie). Amoeba Man and Super Garfield are only two of his few imaginary alter egos though, his most common one being the Caped Avenger. And for a very short period of time in 2001–02, Garfield would fall prey to an overweight dog assuming various identities (e.g. Bungee Dog, Trapdoor Dog, Warm-Up Dog, etc.), which would appear from out of nowhere and squish him in any direction.

It is also given that Garfield uses the “sandbox” on occasion, such as in one 1978 strip; he says he hates commercials because they’re “too long to sit through and too short for a trip to the sandbox”.[4] It was revealed on October 27, 1979, that he doesn’t like raisins.[5] His birthday is June 19, 1978, the day the first Garfield strip was published.[6][7][8] On Garfield’s 25th anniversary in 2003, several strips were featured with him interacting with the version of him from 1978.

Garfield frequently gets into many adventures, such as getting stuck in roll-up shades, sparring with mice, and getting locked up in animal shelters. In 2005, Garfield and Jon appeared in several comic strips of Blondie in honor of their 75th anniversary.[9] Garfield got excited because he didn’t have to think.[10] There was an earlier Blondie crossover on the Garfield strip published April 1, 1997 and vice versa, as part of the comic strip switcheroo.[11]

Garfield was one of numerous cartoon characters featured in the 1990 animated special Cartoon All-Stars to the Rescue.

Garfield is an overweight anthropomorphic orange tabby noted for his laziness, smug sarcasm, and intense passion for food, particularly lasagna, pizza, and ice cream. Throughout the course of the strip, Garfield’s weight is often an object of ridicule, particularly by his talking electronic scale. Garfield usually does not handle insults or commands from the scale (or anybody else) very well, and will normally respond to such remarks with violence or a comeback of some type.

Garfield lives with his slightly eccentric, socially awkward owner Jon Arbuckle and Jon’s unintelligent pet dog Odie, and enjoys satirically teasing them. He particularly enjoys causing Odie physical harm or insulting him, and teases Jon for his social awkwardness and unpopularity with women. Despite this, Garfield cares for Odie and Jon, but cares most for his beloved teddy bear Pooky, which is frequently seen in his arms or close to its owner.